Visit us on Social Media - MEWE

History and Uses of Beeswax for Candles

Beeswax was used by the Egyptians in painting and to protect the surface of painting in their tombs. The Greeks used it in making dolls. The Persians embalmed the dead with wax and the Romans used beeswax to model death masks and life-sized figures.

Beeswax candles have always played a part in furnishing light. From early times, beeswax has played an important role in religious liturgy. The Catholic Church, at one time, required all religious candles to be 100% virgin beeswax; it regarded the wax as typifying, in a most appropriate way, the flesh of Jesus Christ born of a virgin mother. It was also observed that beeswax candles burn producing no smoke; paraffin candles emit a black soot, which covered paintings and religious artifacts in the church. During World War II, beeswax was so much in demand for coating planes and weapons that some beekeepers were differed from service.

You have probably heard the saying: "It's non of you beeswax." This expression means, "It's non of you business." Its origin probably stems from the time when only the wealthy could read and write. To secure written correspondence, he writer sealed the message with a dot of melted beeswax often with the family seal. Envelopes were not used at that time, so the wax seal kept letters private.

The waxes of commerce may be divided into three groups; animal wax, of which beeswax is the most common; mineral wax, including the by-products from refined petroleum, paraffin and natural vegetable wax, obtained from the leaves or plant parts. Beeswax is a fatty acid composed mainly of cerotic acid with small amounts of palmitic acid. You know you have pure beeswax if a powdery deposit of 'bloom appears on the wax after the item is stored for some time. 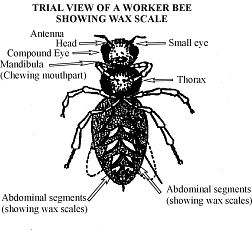 Where does beeswax come from?

Beeswax, the material used by honeybees in the construction of their combs, is a product of their own bodies. Certain wax glands, possessed only by the workers, secrete it. Wax glands are at the height of their development and productivity in bees 12 to 18 days old. The bees gorge with honey and hang in festoons near the site of the comb-building operations. The wax appears in the form of small, irregularly oval flakes, or scales, which project from the overlapped portions of the last four abdominal segments visible on the under-side of the bee.

The wax scales are scraped off by one of the hind legs and moved to the first pair of legs (forelegs) A foreleg transfers the scale to the mandibles where it is masticated and then applied to the comb. It is estimated that bees must consume 6-8 pounds of honey to produce one pound of beeswax.

Borax is sold with laundry detergents, but chemically pure borax, which is required for cosmetics, is sold by drug stores and chemical laboratories. Lanolin is sold by drug stores.
In a microwave or double boiler, melt the oil, lanolin and beeswax to 160 degrees F. Heat the borax and water in a separate container to 160 degrees F. Be sure the borax is dissolved and the wax is melted. Add the water mixture to the oil mixture while stirring briskly. When white cream forms, stir slowly until the mixture cools to 100 degrees F. Pour it into small wide mouth jars.

Melt the ingredients in a microwave or double boiler. Brush the hot mixture onto the leather and allow it to penetrate. If possible, place the item in hot sun to help the mixture penetrate the leather. Polish the leather with a cloth to remove excess.

Grafting wax scales the union of plant tissue. Heat the beeswax and rosin at 250 degrees F. until they melt. Stir in the remaining ingredients.

Melt the ingredients together in a 250-degree F. oven. Pour this into a paper tube. Peel away the paper as the wax is used.

Melt the wax, lanolin and petroleum in a microwave. Add the honey and essential oil. Stir the mixture until it is cool.